Browsing the endless list of titles on my Kindle that I had yet to read, I came across a book that I downloaded a long time ago.  It’s not a new release, but Rest in Pieces by Katie Graykowski made for a fun diversion. 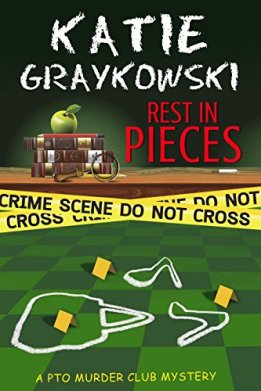 Mustang Ridges isn’t a town, a stripper, or some old western movie. She’s a feisty, single mom living in the small town of Lakeside, Texas where money does buy happiness and keeping up appearances is much more important than the truth. Six months ago on her thirtieth birthday, her husband decided that married life, fatherhood, and his job as the Lakeside Chief of Police weren’t as exciting as a permanent vacation to Grand Cayman with his mistress and a million dollars in diamonds he stole from the police evidence lockup.

Mustang is a pariah in a Lakeside full of piranha. But she refuses to leave—this is her home, and she figures that if she can’t join them, then she’ll beat them at their own game. With a little luck, some intimidation, and the help of her good friends Monica and Haley, Mustang presides over her own little slice of Lakeside, the Bee Creek Elementary Parent Teacher Organization.

All is quiet in Lakeside until Molly Miars, the kindergarten teacher, is found dead. According to the new police chief, she overdosed on heroin. That doesn’t explain why her head was the only body part to make it to her funeral. Mustang and her fellow PTOers don’t buy the heroin overdose for a second.

Vowing to do right by Molly, the PTO decides to investigate.

Quickly they find that Lakeside isn’t the quiet, sleepy town it appears to be. There is a dark side—money laundering and drug trafficking. When Mustang’s name turns up on a contract killer’s hit list, things go from bad to worse. Can she and the PTO stay alive long enough to find out who killed Molly Miars?

Mustang, Monica, and Haley (dare I say, partners in crime)  make for a unique team of sleuths. The three women are great friends and fellow members of the local Parent-Teacher Organization, with all of the associated drama. And they all knew the victim. They manage to find their way into some pretty far-fetched, yet humorous situations as they try to discover what happened to Molly. The story moved along at a nice pace, with enough twists to keep you wondering what might happen next and, of course, who the killer might be. Although Mustang succeeded in uncovering Molly’s killer, some of the questions raised were left unanswered, presumably to be addressed in the next book in the series.  It was a lively, enjoyable read.

Content advisory:  Although it didn’t bother me, this book does include slightly more graphic content and stronger language than the average cozy mystery.