If you enjoy international intrigue and suspense, you will want to check out Drone Strike: An Anthony Provati Thriller (Appointment with ISIL Book 2) by Joe Giordano.  I had reviewed the first book in the series, and was glad when the author offered me a review copy of the sequel. 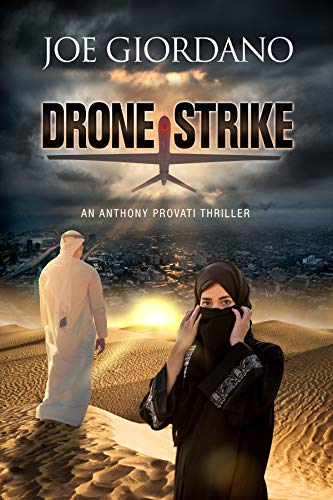 Drone Strike, an Anthony Provati Thriller. Karim’s family is killed as ‘collateral damage’ by a U.S. drone strike in Iraq. The Islamic State in the Levant exploits his rage, recruiting him for a terrorist attack on the U.S., and only Anthony Provati can stop him. Drone Strike takes you on a fast-paced adventure across the Mediterranean, into Mexico, finally arriving in the States. Drone Strike explores the psychological realities that seduce Karim to commit an act of terror, includes a love story between Moslem Karim and Miriam, a Christian woman he defends in Turkey, and highlights the plight of Middle Eastern and Central American refugees.

I really enjoyed this book. As in Appointment with ISIL, the first book in the series,  the author has created a somewhat disturbing scenario that strikes home given the threat of terror faced around the world today. I enjoyed following the protagonist, Anthony Provati, as he again tries to thwart a terrorist attack.  He is the same loveable, flawed guy who finds it hard to resist the temptation of a beautiful woman.

But before Anthony makes his appearance, the reader is introduced to Karim and is given a glimpse into the events that contributed to his bitterness toward America.  He is a particularly well developed character; an internal debate rages within him, particularly after he meets a Syrian Christian woman who is seeking refuge in Europe.

Clearly, an impressive amount of research went into this book – both with respect to the diverse geographic destinations and the cultures and organizations involved.

An interesting and engrossing read. I stayed up way past my bedtime to finish it.

FTC Disclosure: I received a complimentary ARC of this book. This has not affected the content of my review in any way.

For my review of the first book in this series, click here.
The book is available on Amazon.